Who hasn't tried or at least heard of a famous Big Mac at McDonald's fast-food restaurants? However, few people know that it gave rise to the so-called Big Mac Index, which compares the value of currencies of different countries.

What is the Big Mac Index?

The Big Mac Index is the price of the burger in various countries that are converted to one currency (such as the US dollar) and used to measure purchasing power parity.

It all started in 1986 when The Economist magazine decided to estimate the currencies' value by country based on the prices of Big Mac at McDonald's fast-food restaurants.

Thus, The Economist introduced a simple indicator of the fundamental value of currencies globally.

What does the Big Mac Index show, and why exactly was it taken as an indicator?

It's pretty simple. Big Mac is the most well-known product in McDonald's' fast-food chain. Besides, the same ingredients are used for Big Mac in any country: meat, bread, cheese, lettuce, onions, etc. Therefore, The Economist experts use Big Mac alone instead of determining the cost of a consumer basket (more complex method) for each country.

The most relevant Big Mac Index so far (as of July 2022) is presented in the table below. 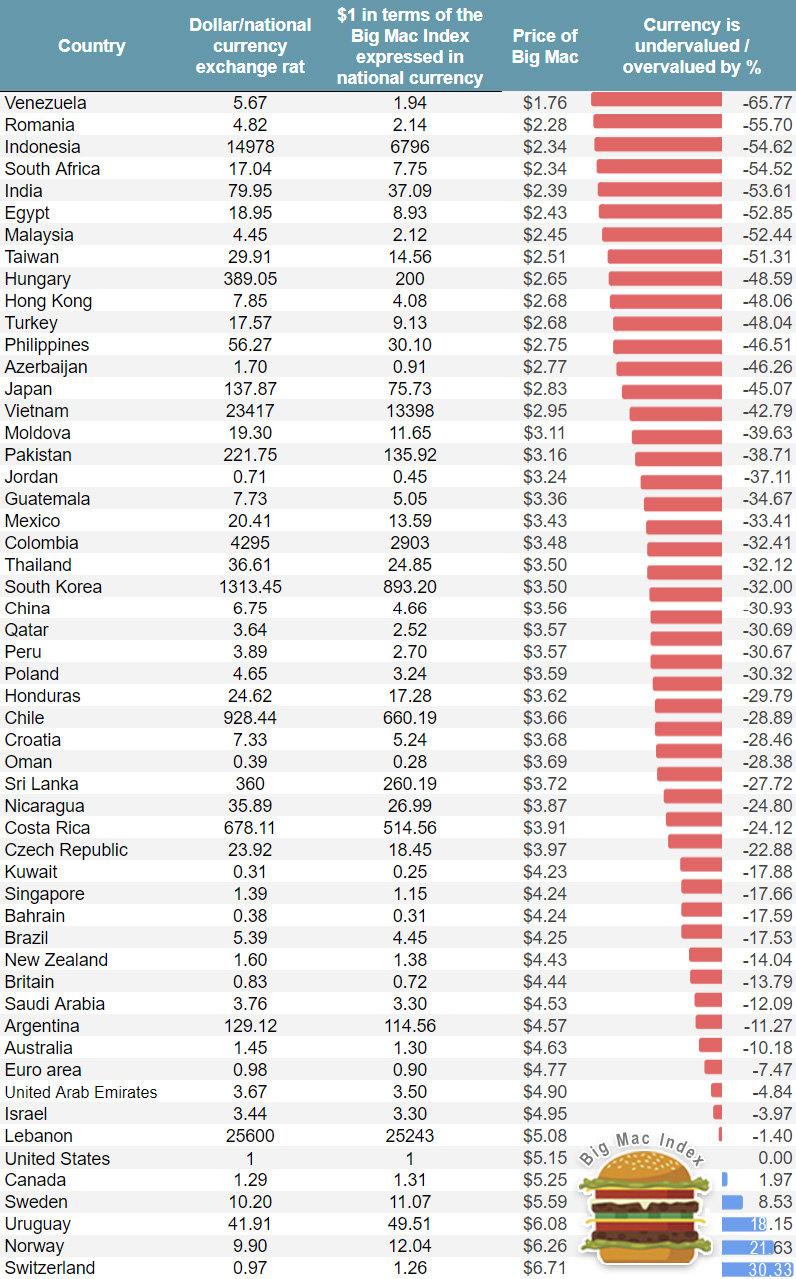 Let's analyze these data a bit.

The Venezuelan bolivar exchange rate expressed in the Big Mac Index in July 2022 is 1.94 bolivars per dollar.

Considering that the current market rate of the Venezuelan currency is about 5.67 bolivar, rather than 1.94 per US dollar, the bolivar is undervalued by approximately 66%.

Thus, the Venezuelan bolivar is the world’s most undervalued (cheapest) currency according to the Big Mac Index.

Big Mac costs $2.28 in Romania. While the price of the burger in the United States is $5.15, the Romanian currency exchange rate is 2.14 lei per dollar in terms of the Big Mac Index.

However, the lei is cheaper in Forex – about 4.82 lei per US dollar (as of July 2022). Therefore, we can conclude that the market undervalues the Romanian currency by almost 56%.


As for the most highly valued currencies, the statistics by countries show that the world’s most overvalued (expensive) currency is the francs in Switzerland.

Considering that Big Mac costs 6.71 francs in Switzerland, the USD/CHF rate expressed in the Big Mac Index terms should be 1.26 francs per dollar. However, the value of this pair is currently quoted around 0.97 in Forex, which makes the Swiss currency overvalued by the market by 30.33%.

According to the Big Mac Index authors, Euro is also undervalued by the market. The average Big Mac price in the Eurozone is $4.77, meaning the currency is undervalued by 7.47%.

Can We Use This Knowledge in Trading?

We can hardly do it in the short and medium terms, but the Big Mac Index can serve as a helpful assistant while long-term trading.

For example, it can be used as a filter when opening positions in the Forex market. After all, if the Japanese yen is significantly oversold against the US dollar, traders should refrain from opening long positions on USD/JPY.

We can draw similar conclusions for other Forex currency pairs.

The key thing to remember is that the Big Mac Index is an accurate indicator of the fundamental value of currencies, and traders can benefit from its use in trading.