The Domino Effect in the Forex Market

What is the domino effect? Simply put, this is a chain reaction where a change of one element triggers similar changes of neighboring and subsequent elements in a linear sequence. Now let’s project this concept on the Forex market.

It’s no secret that all currency pairs are interrelated and often move with a high degree of correlation.

If we take a certain group of currency pairs, one or two pairs from this group will begin to move at some point, and the rest will be initially inactive and after a while begin to follow the former.

These two leading pairs are like the “falling first domino tile” and beginning of a chain reaction. It may be concluded that there are leading and lagging pairs in the Forex market but they always change their roles.

It’s hard for most newbie traders to make sense of the domino effect without directly seeing this regularity on the charts.

Chain reactions occur in the market every week, and the most skilful traders even manage to make good money out of it. However, we don’t recommend you to use it as your basic strategy, but we just want to say that the domino effect and its understanding is yet another climbed stepping stone on the way to professional trading.

While discussing the domino effect, each of you might have ever thought where this divergence comes from, and why pairs don’t always move in unison because “Price takes all into account”. Let's figure it out together

Nature of the Domino Effect

Indeed, according to the efficient market hypothesis, all the essential information immediately and fully reflects upon market prices. When considering the Forex market specifically, it responds first of all since its daily trading volume exceeds that of NYSE exchange over 90 days.

However, the domino effect happens to be because every currency pair has its own support and resistance levels, news schedule and much more that personalize every pair a little bit.

Here is a good example of domino effect: news for a currency pair comes out at night, and the pair breaks its major level; other correlating pairs follow that pair after US dollar news announcements in the daytime breaking their major levels. In other words, when there is an imbalance in the movement of pairs, the market will always seek to correct it.

The domino effect is similar to arbitrage strategies but the latter uses precise formulas, and the former implies mainly visual assessment of charts.

Why do most traders not even notice that?

Imagine that some exotic currency pair has greatly strengthened, and there are 4 traders who think this way:

The first trader says: “Wow, what a large move the pair has made!”

The second trader says: “Um, I wonder what has triggered such a strong move?”

The third trader says: “Which pair? CAD/CHF? I can’t believe somebody trade it. I trade EUR/USD only!”

And the forth trader says: “I monitored the pair and earned on the move. Besides, I expect lagging pairs to repeat this move.”

It's all clear about the first three traders: probably, they trade EUR/USD only and exclusively with indicators; at that, they can’t see the big picture at all.

The forth trader uses the domino effect to enhance the effectiveness of own trading in addition to having a fair bit of experience. This trader successfully uses the same information that the first three traders had but wasn’t used as intended.

Most Forex traders stuck to one or two currency pairs and use only inefficient indicators for market analysis so they will never be able to see the domino effect in the Forex market even if they open the required charts.

It is to be concluded that you need to spend enough time to analyze numerous currency pairs on various timeframes to master the domino effect.

Let's take a look at some examples of the domino effect in Forex:

Now consider the following situation: two-day level has been established on the charts of US dollar pairs. AUD/USD pair that breaks this level at night during the Pacific session acts as the first domino tile. Afterwards, GBP comes into play and also makes a new two-day low following the London open. The last domino tile (USD/JPY) falls later on the same day but during the US session – the pair completes the series and makes its new two-day high. You can see the whole situation on the picture: 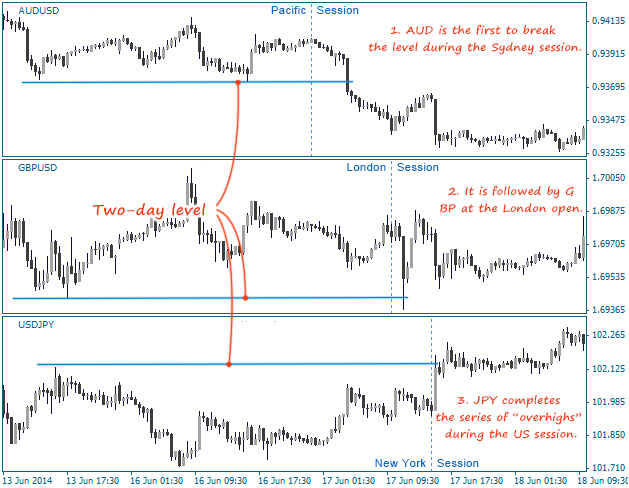 We hope that you have learned why USD/JPY has made a new high but not a new low. If not, notice where USD is in every currency pair – to the left or to the right.

Example 2: The Domino Effect: Strength or Weakness of One Currency

If we put together all the currency pairs including one common currency, it would be easy to determine the lagging ones. 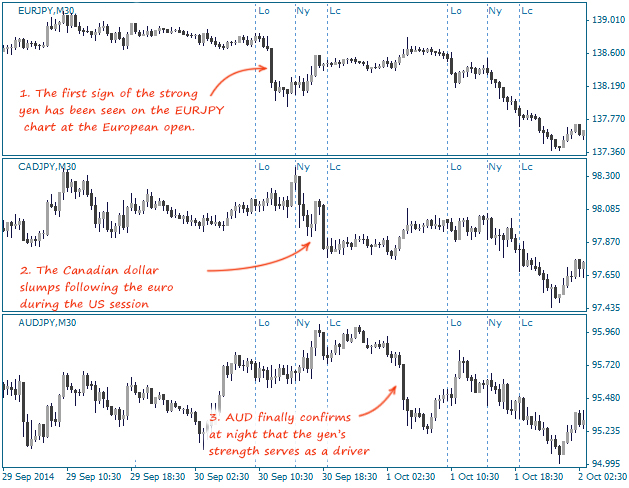 Let’s take an example (see the picture above) where several yen pairs are declining one-by-one with each pair declining in its session. That’s how we understand that the strong yen acts as a driver of this move.

But the exciting thing is that a major pair (USD/JPY) hasn’t declined at this time but even gained a little ground. However, the imbalance has been corrected on the next day – all the yen pairs keep declining, and USD/JPY has declined doubly.

It is a commonly shared view that there are 7 major currency pairs all of whom are traded against the US dollar. Just to remind you: EUR/USD, GBP/USD, USD/CHF, AUD/USD, NZD/USD, USD/JPY, and CAD/USD. The US dollar is the interlink so these pairs are closely correlated with each other.

If you analyze all 7 pairs, you can notice such a thing: one pair begins to gain rapidly and pulls other pairs higher. In this situation, it’s important to identify the lagging pair in time and make a profit at it. The probability that your finding will turn into profit is directly proportional to the degree of correlation of a lagging pair in relation to the rest ones. For example, the degree of USD/JPY pair’s correlation related to other pairs is much lower than that of GBP/USD.

Let’s sum it up

Essential divergences in the dynamics of currency pairs occur even in such highly liquid market as Forex. Our task is to learn how to benefit from it.

As regards the domino effect, the picture of what's happening in the market will start to come through in your mind only after a long practice and analysis of currency pairs on various timeframes. The ability to recognize the fall of the first or the first two domino tiles is really important since the first domino tile might be a harbinger of a new trend beginning in the sideways market. Besides, when you see divergence in the market movement next time, you’ll already know that it necessarily corrects itself at some point.