What Is Trailing Stop & How Does It Work?

Trailing stop is a trading terminal feature that allows you to automatically drag Stop Loss order along with the price with a small lag (at a certain amount of points).

Speaking of Stop Losses, here at FXSSI we use StopLossCLusters indicator to determine the best levels of SL and TP placement.

The need for this feature arose due to the trivial inability of traders to be always around a trading terminal. Therefore, Trailing Stop helps you to make your trading more automated.

You can see how it works in the following picture: 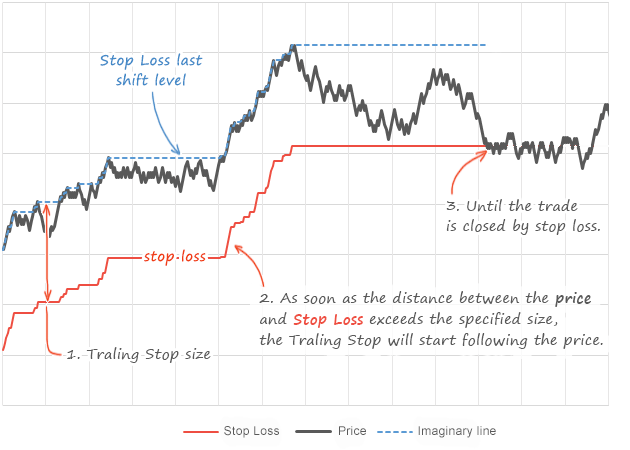 First of all, a trader sets Stop Loss in MT4 and specifies the size of Trailing Stop in points.

Further, if the difference between the current price and the Stop Loss price exceeds the specified value (i.e. the size of Trailing Stop) at some time, Stop Loss starts being automatically dragged along with the price.

If the price begins to move in the opposite direction, Stop Loss level will remain the same until trade is closed by Stop Loss or the price keep moving in the supposed direction.

How to Set Trailing Stop in MT4

This is not a hard work even for a newbie trader. Here is an example of setting Trailing Stop Loss in MT4.

To enable the Trailing Stop feature, right-click on an already open position and select “Trailing stop” from the pop-up menu.

Next, you need to select Trailing Stop level from the proposed values in another pop-up menu or enter your own by clicking the “Custom…” option. 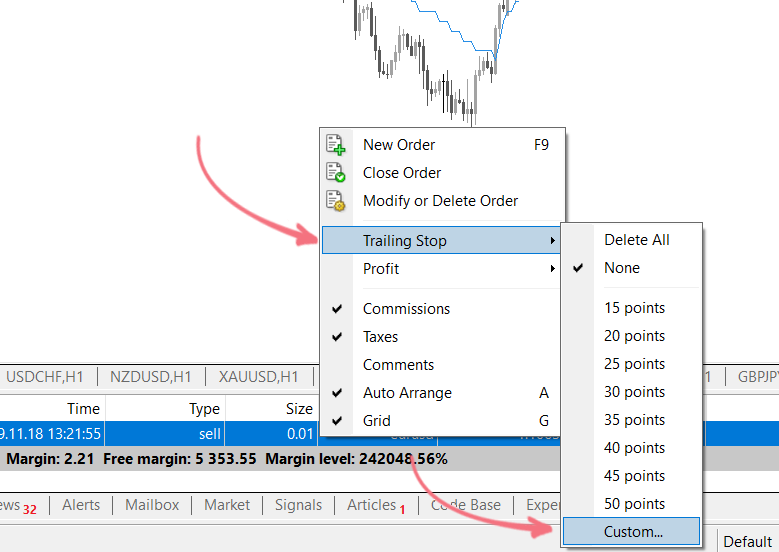 In the window that opens, you need to specify the desired Trailing Stop level, which in our case is 80 points. 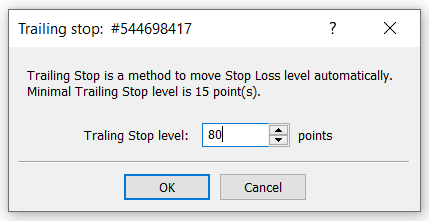 Disabling Trailing Stop in MT4 terminal is even easier than enabling it.

To do it, you need to right-click on an open trade, select “Trailing stop” in the pop-up menu and click “None” in the next pop-up menu. This is how Trailing Stop feature can be deactivated. 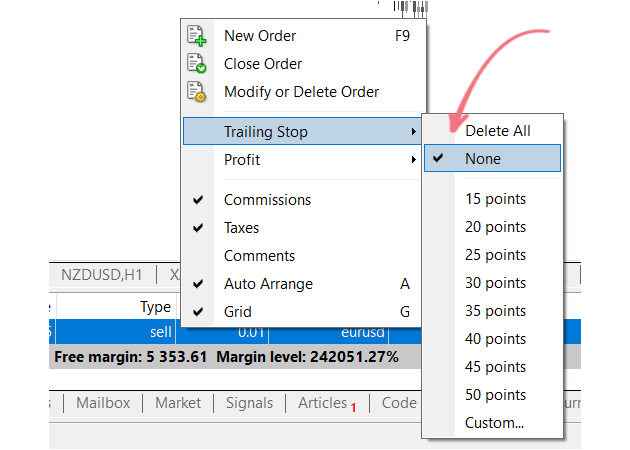 Note that the procedure for setting Trailing Stop in MetaTrader 5 (MT5) terminal is absolutely similar to that in MT4.

Imagine that you have an open position, say Buy on USD/JPY, in the Forex market. After opening it, you set Stop Loss to hedge your position against unexpected market fluctuations. Next, you can see how USD/JPY starts to rise in price, following which your profit is increasing on your trading account.

Sooner or later there comes a situation where you can no longer monitor the market. Perhaps, you need to do other things or just want to get some rest. However, you don’t want to leave the position without control. Additionally, having estimated the current USD/JPY price, you understand that the bullish trend for this currency pair is far from being over. This is where Trailing Stop steps in: it will help you in hedging against unexpected market movements.

Let's explain our example in more details. Assuming that the bid for USD/JPY currency pair is 112.00, following which this value has risen to the level of 112.70 after a while. You can no longer monitor the market, and the potential of the upward movement has not yet been exhausted.

If so, you need to set Trailing Stop size to 70 points for this position. How does Trailing Stop work in this case? If USD/JPY has risen to 113.10 when you have walked away from the terminal, Stop Loss will be moved along with the price and follow it at a distance of 70 points, thereby hitting 112.40. If the currency pair hits 113.50, trading terminal will automatically move the Stop Loss up to 112.80.

Suppose that after hitting 113.50, USD/JPY has unexpectedly fallen sharply to 112.50 on the back of the important news release. Thus, your position will be closed at 112.80 by the Stop Loss and bring you 80 points of profit.

This example shows how setting Trailing Stop helps traders in avoiding unexpected losses. However, Trailing Stop doesn’t have to be set only before you’re going to walk away from your trading terminal. You can set Trailing Stop right after opening a position. As shown in the above example, as soon as the price hits 112.80, Trailing Stop feature is automatically activated, and Stop Loss begins to move up along with the price at a distance of 80 points.

Some Tips for Using Trailing Stop Loss in MT4

Trailing Stop feature of MT4 differs from that of Stop Loss and Take Profit in that it’s inactive when the computer is turned off. Therefore, if you want Trailing Stop to perform its functions when you’re not around trading terminal, make sure to leave your computer on.

In addition, you can also download Expert Advisors in the form of Trailing Stop Loss, which level is set starting from 1 point rather than from 15 points like in the standard Trailing Stop in MT4, on the Internet.

Along with MT4, Trailing Stop can also be used in Quik (another popular trading terminal).