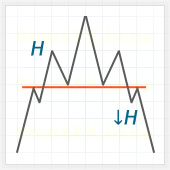 This pattern is considered a reversal one that indicates a change in the current market tendency (trend). The “Head and shoulders” pattern consists of three successive tops/bottoms which, as you may have guessed, are visually similar to head and shoulders. Here is an example.

You need to wait for the pattern to be fully complete in order to make a trade using a classical strategy. It is assumed that the “Head and shoulders” pattern is considered complete only after crossing the so-called “neckline” by the price. 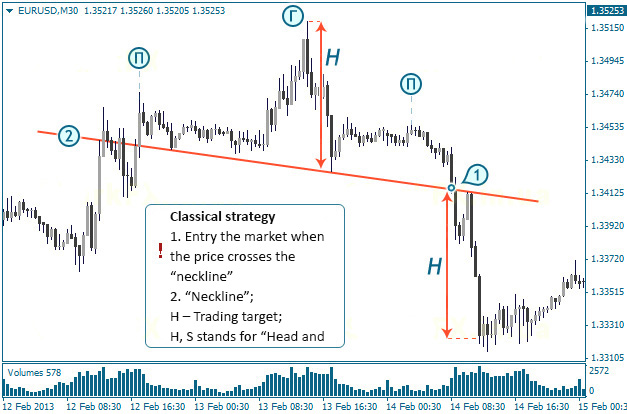 Enter the market at the point (1) when the price crosses the “neckline” (2);
Trading target is equal to the height (H) from the pattern’s top to the “neckline”;
Stop order is set at the top (“head”) of the pattern.

Reasons Behind the “Head and Shoulders” Pattern Formation

Most sources believe that the main reason for the “Head and shoulders” pattern formation is the inability of the price to develop a sufficient impulse (in the “right shoulder”) in order to make a higher high of the pattern. However, not everyone shares the opinion, as the modern market is strictly subordinate to the interests of “big money”, which, if desired, could easily continue to push the price towards the trend to make a new high, so the option of the “inability” is not viable.

What does actually happen then? The fact is that the “Head and shoulders” pattern occurs at the time when the trend is so obvious that even the laziest guy rushes to make money on it, thereby adding to the market by orders opened “towards the trend”. When “big money” sees this picture, they have no choice but to add to their counter-trend positions. It is known that a major player cannot enter the market at a time due to the size of its positions, so it uses the maneuver of the “Head and shoulders” having the form of three tops as a source of liquidity. A clear evidence of the above said is the significant trading volumes at each of the “Head and shoulders” (“H&S”) pattern’s tops.

Alternative Strategies for the “Head and Shoulders” Pattern

The “Head and shoulders” pattern provides a good opportunity to make money on its inherent volatile impulses, while it can be noted that it is not very easy to do. It is important to remember that the “H&S” is a reversal pattern, and experienced traders advise that “It doesn’t make sense to catch reversals”. The “H&S” pattern is easy to see on M30-H4 timeframes and often starts one day (“left shoulder” + “head”) and ends the other day (“right shoulder”).

Alternative strategy for trading with the “Head and shoulders” pattern:

Market entry (1) rule – when the supposed “left shoulder” and “head” have been visually identified, next is to observe the “right shoulder” formation. Enter the market at the first signs of the “right shoulder”;
Trading target (Take Profit, TP) is set at the level of the initial point of the first impulse, i.e. at the point (2);
Stop order (Stop Loss, SL) is set a few points below the top of the pattern.

The efficiency of this strategy is achieved due to the possibility to set a small SL with a relatively large TP.

Why does it make no sense to trade with a classical strategy? The problem of entering the market using the classical strategy is that the price often triggers your order and runs away. We have already posted a picture on this issue – click here to view it. There are also the following problems: it’s hard work identifying the “neckline”, and the impulse occurring following the “right shoulder” formation often represents news during which it is difficult to enter the market at a good price. This is why it is good to have an additional signal for trading with the “H&S” pattern in order to increase the probability of exactly a winning trade.