Most Common Breakout Strategies in Forex 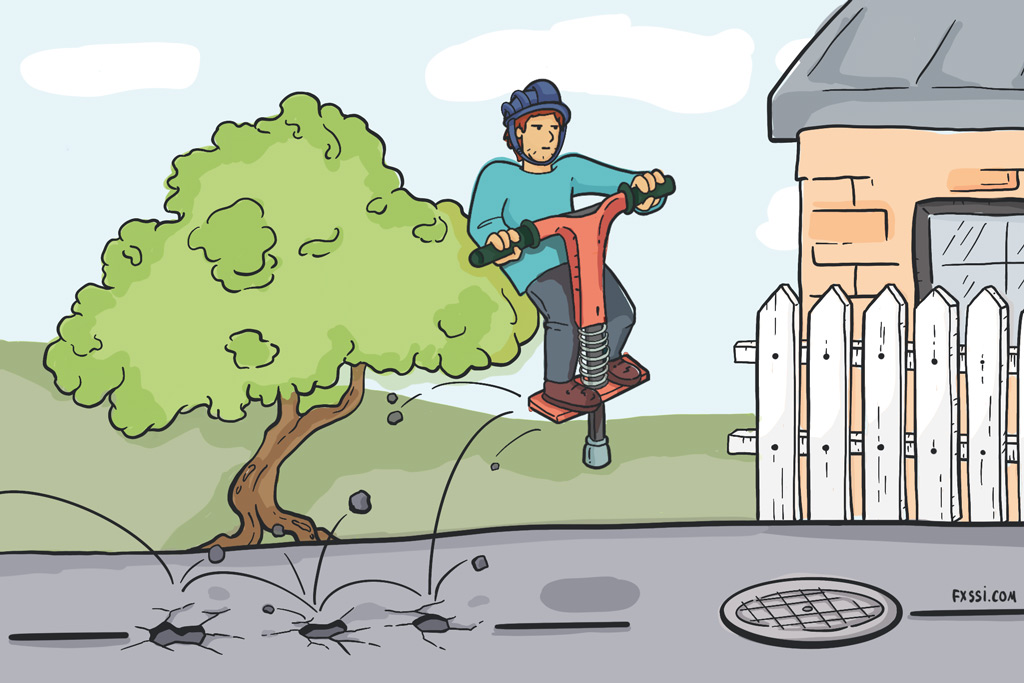 Breakout is the move of an asset above or below a certain level or area. It could be a support, resistance or even a trendline.

In this article, we will show you step by step how to benefit from such movements and how to collect pips in the Forex market.

How to Trade the Support and Resistance Breakout?

The next three scenarios will summarize how to trade the support and resistance breakout. These steps will help you master the tricks behind trading the breakouts.

An immediate breakout occurs when the price manages to break a support or resistance immediately with no pullback or retracement before continuing its main direction.

The pair moves quickly in this scenario, so the trader must also act swiftly. It is the most profitable scenario among the three.

An immediate breakout gives the chance for traders to put a tight stop loss but for sure with high probability to be triggered.

An example is shown below where the EUR/USD broke out the support with no rebound or pull back to it. Let us see how an immediate breakout looks and see what it means. 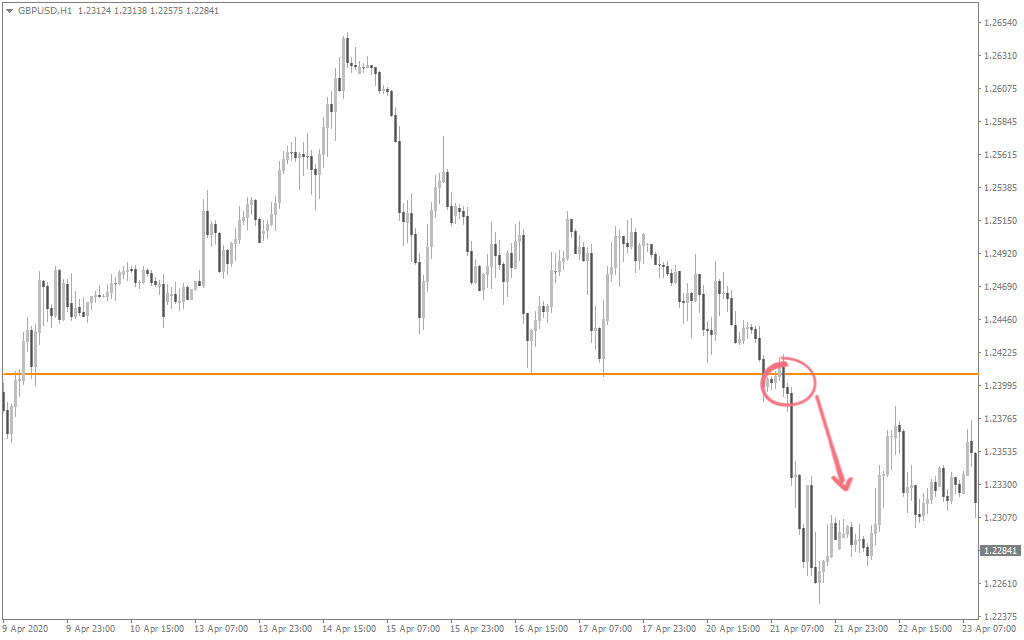 Looking at the screenshot, we can see that the price moved sharply downward with huge momentum after the breakout. A big bearish engulfing candlestick is formed under the support.

A tight stop loss would be few pips right above the support.

After seeing the immediate breakout, it is time to introduce you to pullback breakout.

Pullback breakout is safer version of the immediate breakout. It is recommended to beginners since it gives a confirmation before the price makes its move. This scenario of breakout will be noticed when the price breaks a support or resistance, and then it makes a pullback or a rebound to the previous support or resistance before continuing its main direction. 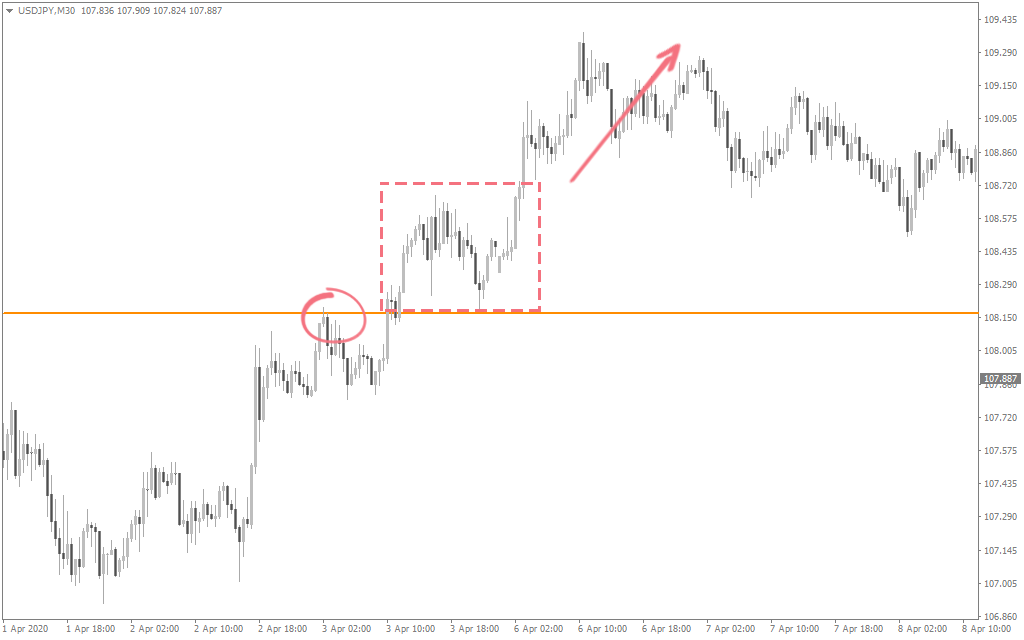 The chart above is showing us how the price retraced to the support (previously resistance). The shaded zone represents this pullback or retracement, after the price manages to continue its main direction upward.

The third scenario you might face is the false breakout. This happens when the price breaks a certain level, but it fails to stay above or below it and does not continue its direction.

As we all know there is nothing perfect in markets, so you should always expect these types of movements. That is why it is advisable to always use a stop loss in your trades. 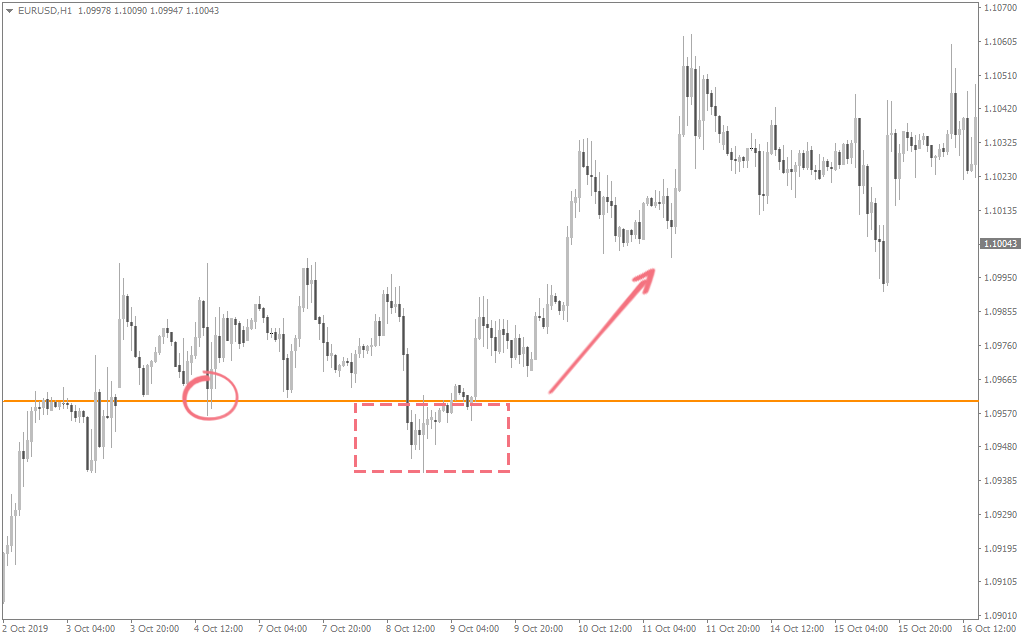 A quick example explains what we are talking about. The pair broke the support (orange line), made a retracement but it did not move downward as expected.

At the contrary, it reversed and moved upward leaving a false breakout behind. A stop loss plotted above the support will protect the trade and make it invalid.

To be able to benefit from these three scenarios it is essential to embed them into a trading strategy. Doing this, could enhance your trading success and consistency in collecting pips within Forex trading.

Trendline helps traders know when a reversal might happen. It will signal an end of a trend with a new trend expected to begin.

Let’s say you have a currency that is displaying a higher high or it is in an uptrend.

Plotting the trendline helps you determine the exact timing of when the price will reverse and start its downward trend. 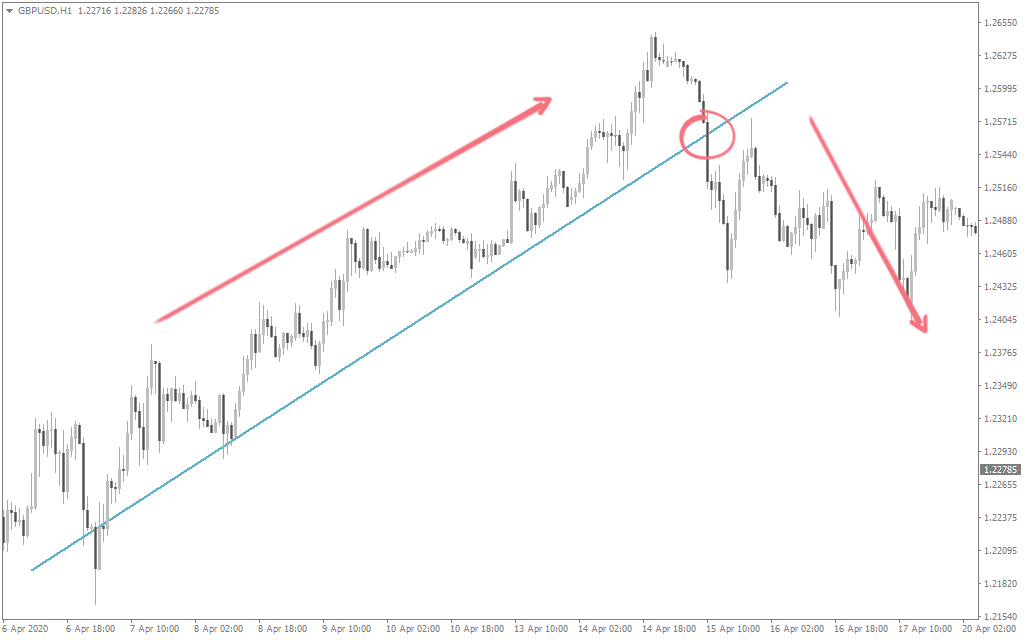 The Asian breakout strategy is popular and easy to apply.

In the Asian session the volume of trading is low, so the price moves in a range. What you should do, is implement a channel with a high and low of the Asian session, one hour before the London session opening.

You place two orders, a buy stop and a sell stop above and below the edges of the channel.

Using two to three pips as a stop loss, your target profit should be exactly 20 pips.

Once the London session opens, the price is expected to breakout from one of the sides of the channel and move a minimum of 20 pips. If one of the orders is triggered, you should close the other manually.

To sum up this breakout strategy.

What you need is: 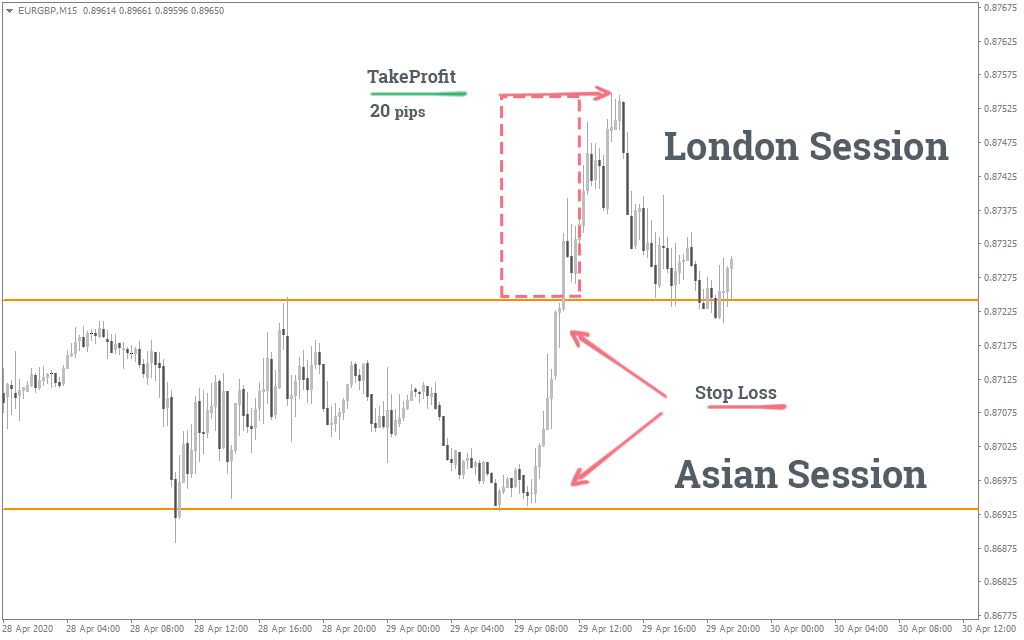 This screenshot shows the application of the Asian session strategy. The two lines represents the high and low of this session. As you can see on the chart, the stop losses are few pips above and below the edges of the channel.

Usually 3 pips are more than enough. If we look at the London session, we can see a clear breakout with a huge candlestick.

This bullish engulfing candlestick shows that the momentum is to the upward side of the channel, and the breakout is confirmed.

Our target profit is set to 20 pips above the top side of the channel.

Once the first one is triggered, close the other order (sell order in this case).

Technical analysts use the flag breakout strategy as a confirmation that the breakout is valid.

A consolidation should be seen after any type of breakout before the big move. 80% of the cases, the price makes a pullback before continuing its direction. This pullback comes in a flag shape. 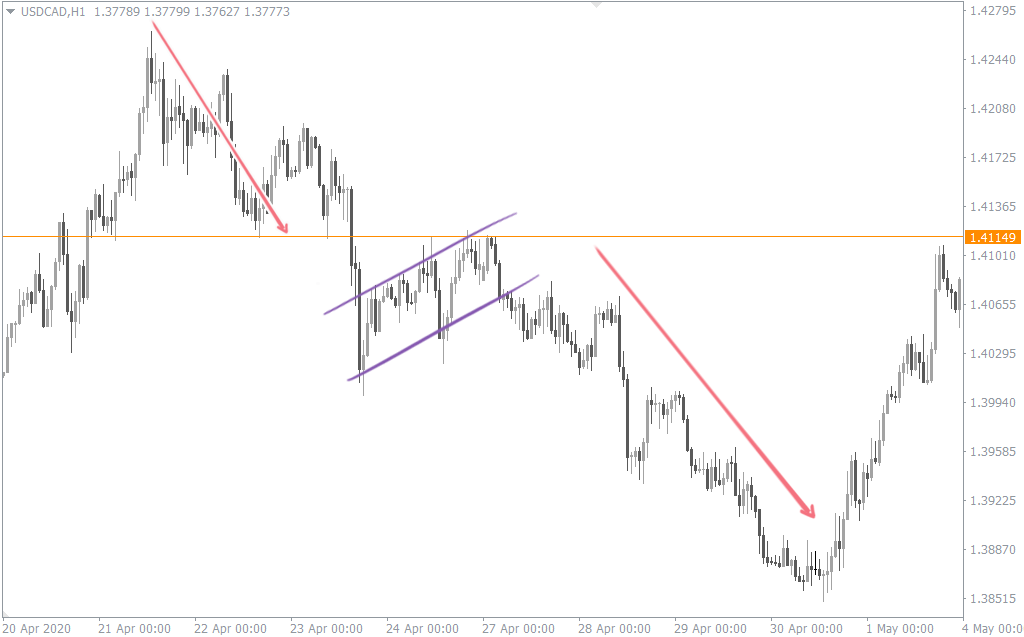 To understand what we are talking about, an example is provided in the image above. It is clear to see that the price was in a downward movement.

The Aussie dollar managed to break the orange support. After this, a consolidation is established under the support. This consolidation edged by two violet lines is what we call a flag. This confirms that the breakout is valid, and the price will continue its main direction, downward in this case.

How to Deal with False Breakouts?

False breakout is something that annoys traders in the Forex market.

Once a breakout happens traders trust their analysis and they jump in by opening a position. After a period, the breakout turns out to be a false one. This is detrimental for the psychology of the trader.

To avoid false breakout, you should look at three things:

To end this article here is some important information that will help you in your future trades.

Finally, patience, discipline, and keeping your emotions in-check is essentially all you need to succeed in trading breakouts. 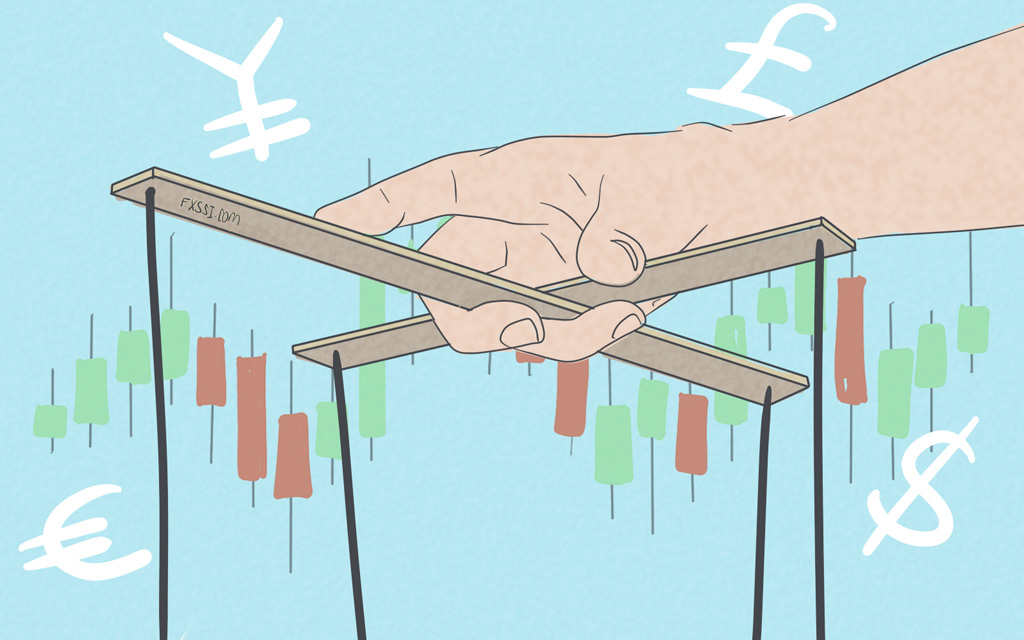 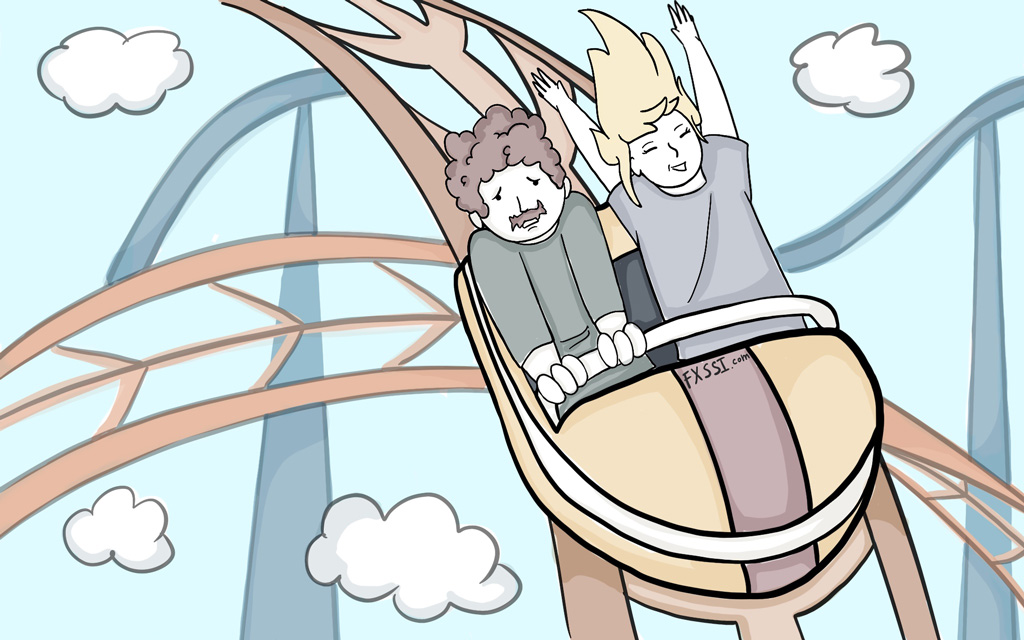 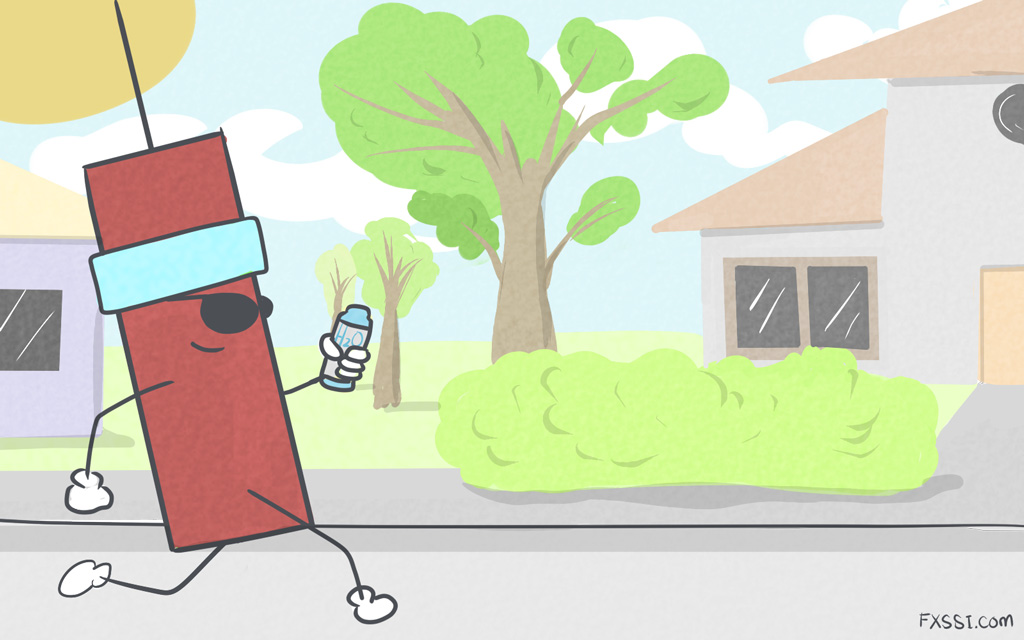