It could be quite tough for beginners to get a grip on the forex market. But these currency pairs should ease your learning process while offering you good trading opportunities.

Before we go on, we assume you already know the basics of forex trading. That is, you know the best trading platforms to trade on and other things like the types of forex trading analyses. Jumping these first few steps is similar to attempting to read without first knowing the alphabet.

With that said, the 4 best currency pairs that beginners can most benefit from are:

The EURUSD currency pair has the European Euro as its base currency and the United States dollar as the currency. These two currencies are strong on their own, with the backing of powerful economies.

The combination of these two currencies makes the EURUSD the most commonly traded currency pair in forex. And this introduces us to the first benefit the EURUSD has for beginner forex traders: its popularity.

Because of the popularity of the EURUSD, there are a lot of materials on the internet that specifically describe how to trade it, such as How to Read EURUSD and Other Currency Pairs. These materials can be a lot of help to beginner traders who want to trade the pair.

Another reason the currency pair is suitable for beginner forex traders is that EURUSD is can be traded using both kinds of forex analysis: technical and fundamental. In other words, the pair gives you enough opportunities to put the forex trading basics you’ve learned to test.

The USDJPY comprises the US dollar and the Japanese yen. And it is a currency pair that many traders love for its volatility and sharp swings. These wide price swings are mostly due to the JPY. Beginner forex traders who want to learn how to trade extremely volatile pairs would learn a lot on the USDJPY.

The yen is very much economic driven, and major news and reports rarely pass without having made their mark on the currency pair. As a result, beginner forex traders who want to practice news trading strategies will get a lot of opportunities on the USDJPY.

Despite the high volatility of the USDJPY, it still maintains a reasonably high level of predictability when you analyze it. Thus, the chances of trading the pair successfully are fair.

The GBPUSD is another highly volatile pair on which the beginner trader can rely to understand the operations of volatility in the forex market. This currency pair has the British Pounds as the base currency and the US dollar as the quote currency. Both economies are robust enough to fend off market instability on the pair.

The GBPUSD is one of the safest currency pairs to trade because of its tendency to sustain long trends. On the daily chart below, for instance, you’ll notice that the first candle on the uptrend started on the 20th of March, 2020.

The trend continues for over a year and had its peak on the 1st of June, 2020. And with trends lasting for this long, beginner traders can have a plethora of opportunities to practice their trend trading. 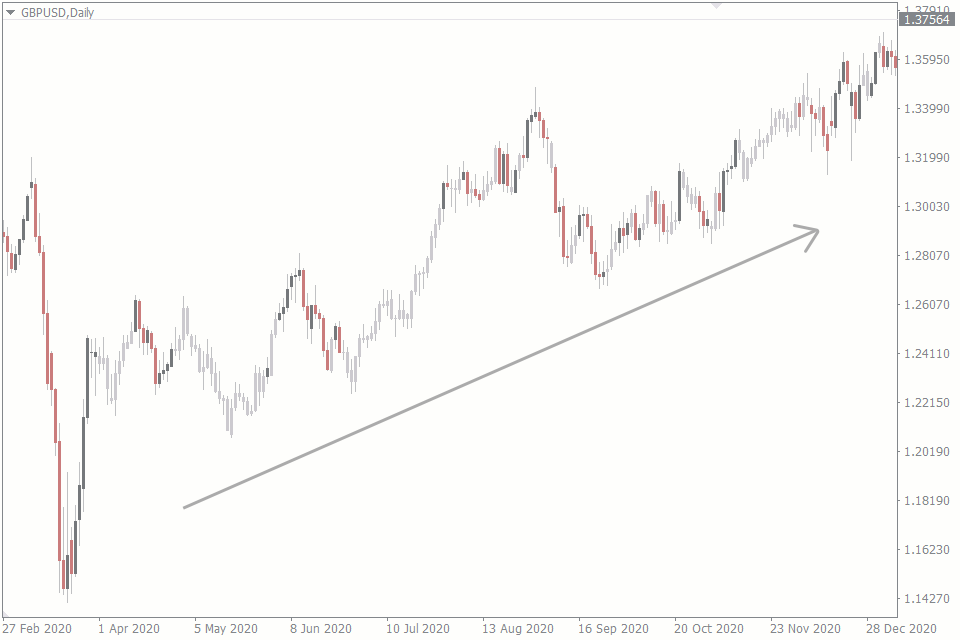 Also, beginner traders who want to make short-term trades while being exposed to as many pips as possible can trade the GBPUSD. This is made possible because of the relatively high volatility of the GBPUSD.

The Aussie, as it is nicknamed, is made of the Australian Dollar and the US dollar. For beginner forex traders who want to take a more slow-paced approach to forex trading, the AUDUSD is one of the safest pairs to trade.

It has a low to medium level of volatility. And this is probably the biggest advantage of the currency pair, as beginner traders can easily get in and out of trades without risking too much on high volatility pairs.

Another major strength of the AUDUSD is its predictability. You can draw your trendlines on the chart, for instance, and expect to see price reactions around the slanting lines. This predictability makes it relatively easy to trade for beginner traders who want to concentrate on practicing their forex basics.

As a beginner, it isn’t enough that you pick one of the best currency pairs up there to trade. It would also be of immense help to you if you knew how to trade them properly. Here are some useful tips to help you:

1. Don’t over-invest in one currency

This is a mistake many beginner forex traders make. You make 5 trades, and all of them include a particular currency, especially the USD. We strongly advise you against doing this, as any bad news that hits your overcompensated currency pair would have an across-board effect on all your trades.

Instead, we advise that you diversify your trades as much as you can. When you trade the EURUSD, for instance, don’t trade the GBPUSD as well. Instead, try trading another currency such as GBPJPY or the CADJPY. This way, any bad news that affects one currency doesn’t wreak a lot of havoc on all your trades.

Forex currency pairs often correlate with one another. The EURUSD and the GBPUSD both share a positive correlation as you’ll see in the image below, while the EURGBP and the GBPUSD share a negative correlation. What this means is that the first two currency pairs often move in the same direction, but the last two move in opposite directions to each other. 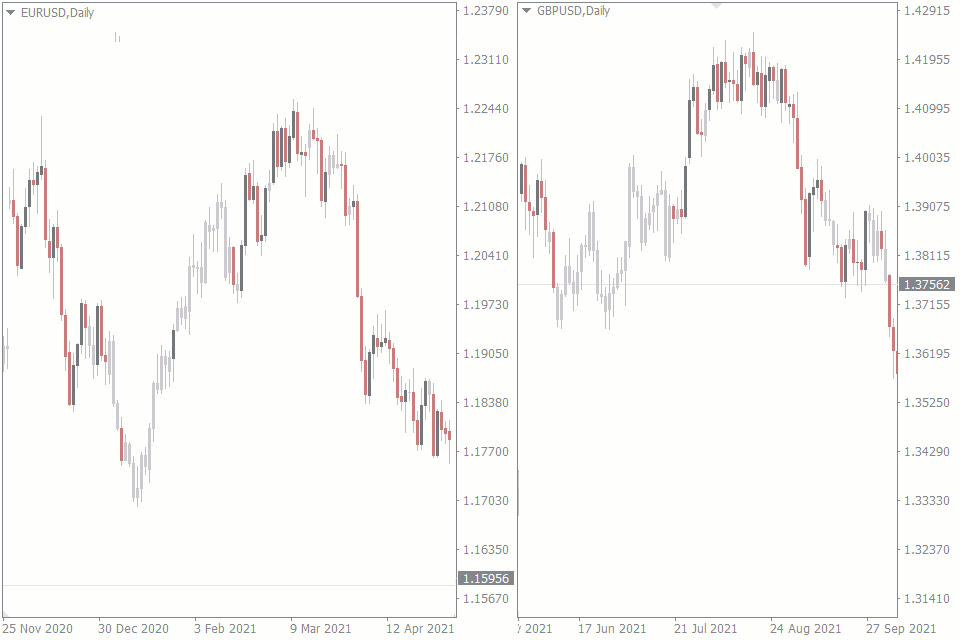 Correlations are ways for beginner forex traders to confirm their trades or even look for better trading opportunities. If you’re looking to enter a sell order on EURUSD for instance, but the GBPUSD has a bullish outlook, take some time to think about the trade again.

3. Stick to the major currency pairs

Here’s an observation you might have missed: all the currency pairs here are major currency pairs. As a beginner forex trader, only stick to the major pairs.

Only these pairs have the liquidity, volatility, and the stability that can help you understand the forex market. In addition, these major currency pairs have low spreads across various brokers.

As a beginner in forex trader, those currency pairs are good to trade. However, these are only recommendations. You can do your research and come up with your list of currency pairs to trade.

However, regardless of whatever currency pairs you choose to trade, the three trading tips we gave there are going to be very useful.

Now that you know what currency pairs to trade, you can take your learning up a notch by learning about SSI and market sentiments.