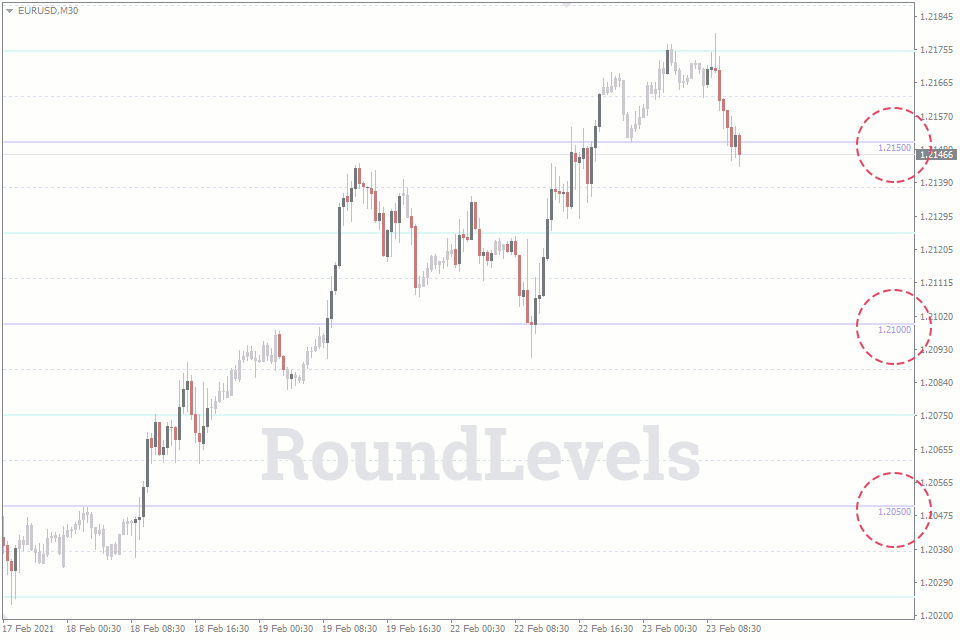 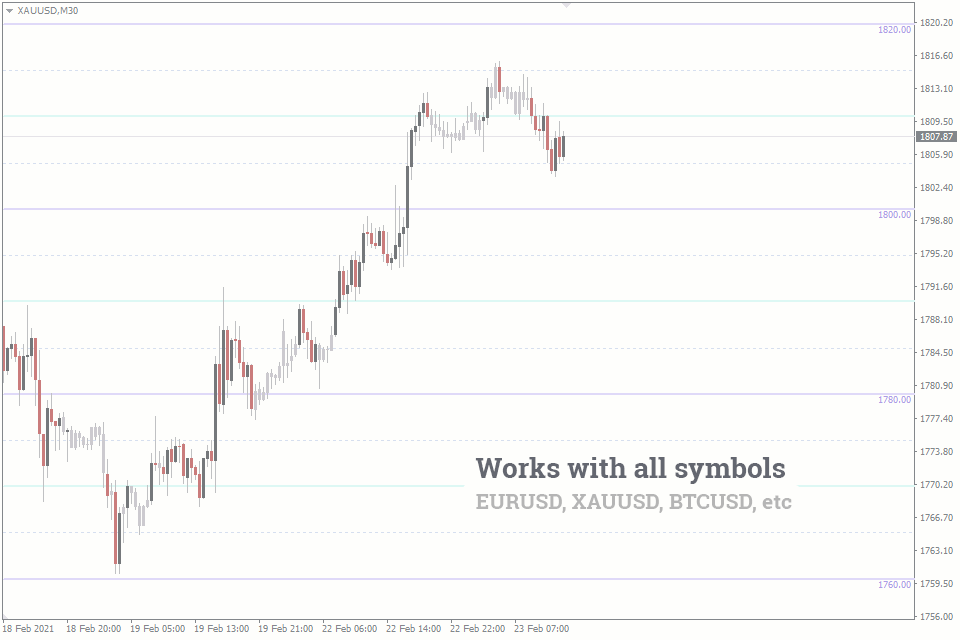 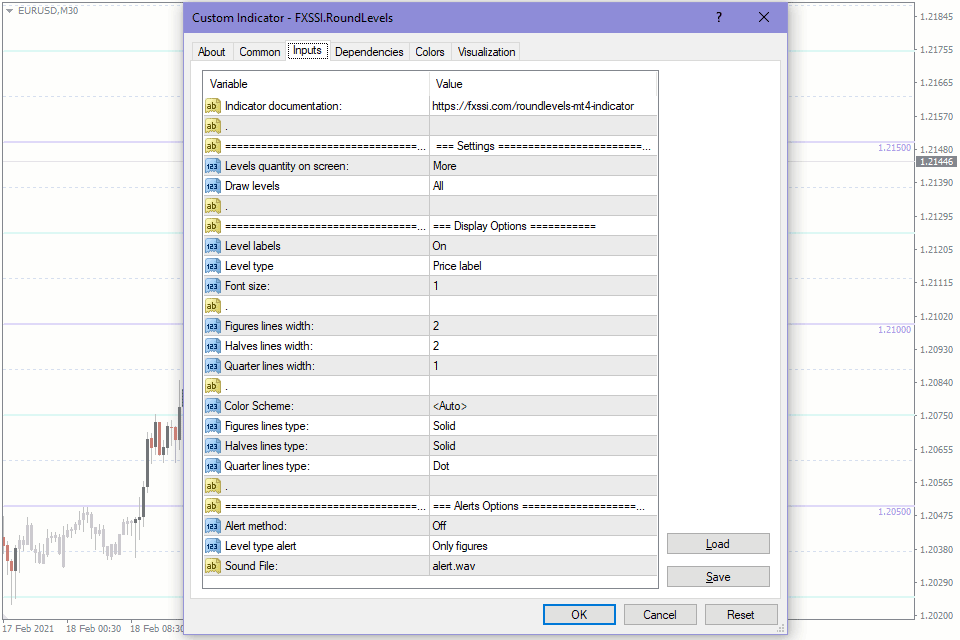 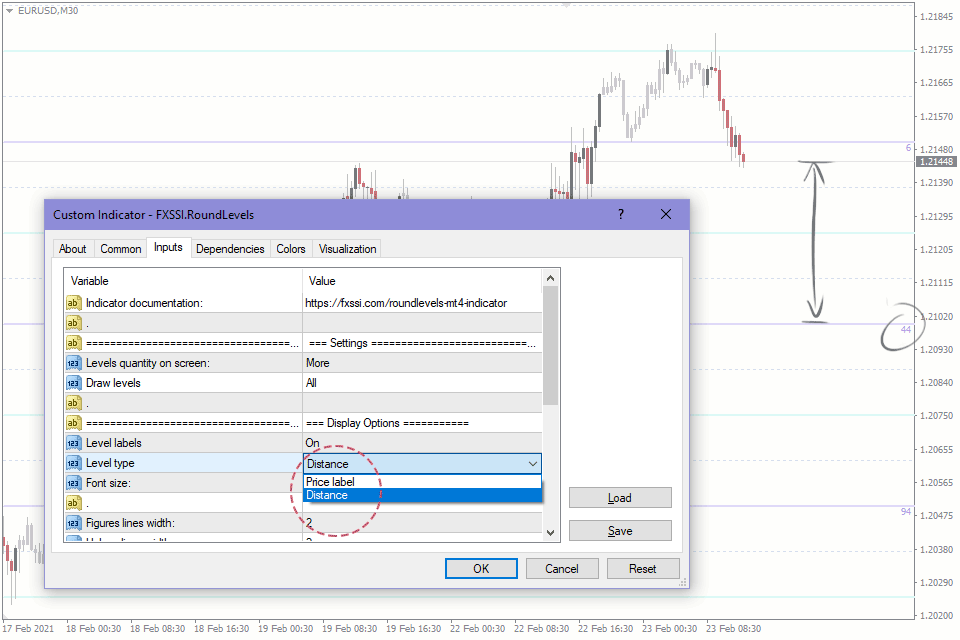 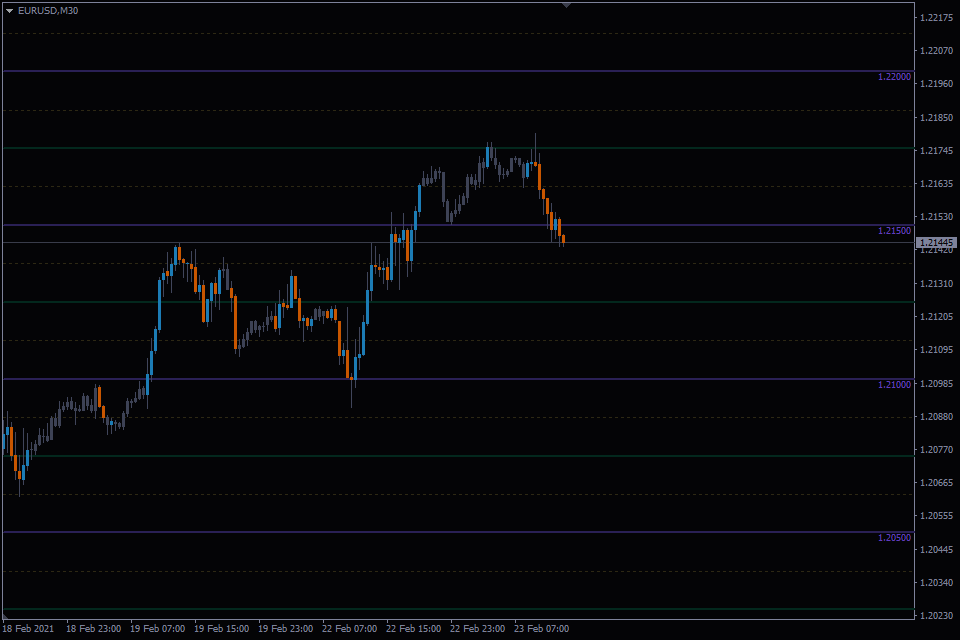 The Round Levels indicator displays the so-called psychological (round) levels on the price scale of the chart.

There was a need for this indicator since MT4 does not have such a function by default. Instead, it displays a grid that is linked neither to the price nor to the time.

Before installing the indicator, disable the standard grid by pressing Ctrl + G in your terminal window.

Why Is It Important to Analyze Round Levels?

The round level represents the price of an asset, which is equal to an integer value or has several zeros after the decimal point.

The distance between two round levels is called a "figure." For example, if EURUSD covered 300 points from 1.100 to 1.400 during a week, we can say that its rate moved for three figures.

Round levels are natural support and resistance levels since many traders don’t hesitate to place their orders there. That is why you can use them as a benchmark for setting your trade target, as well as an additional signal for spotting entry points and placing Stop orders. 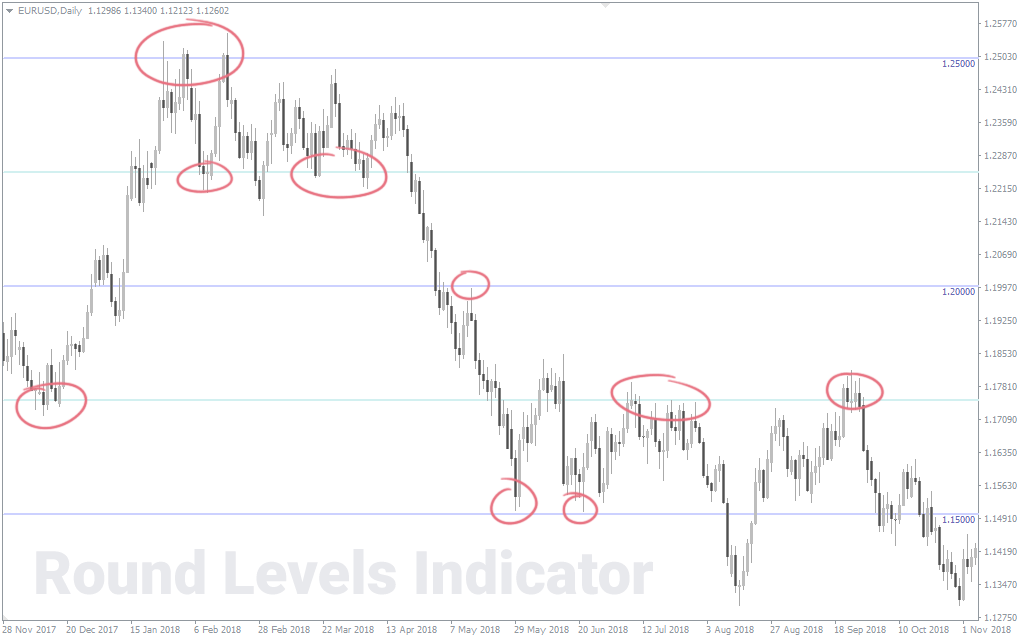 The image above shows how actively the price interacts with these levels.

Forex Trading With Round Levels

As already mentioned, the Round Levels indicator can be used for:

Let’s consider the analysis algorithm for each case.

Setting a target using round levels

Round levels can serve as the basis for setting Take Profit if the analysis has been performed and additional factors are signaling a potential trade. 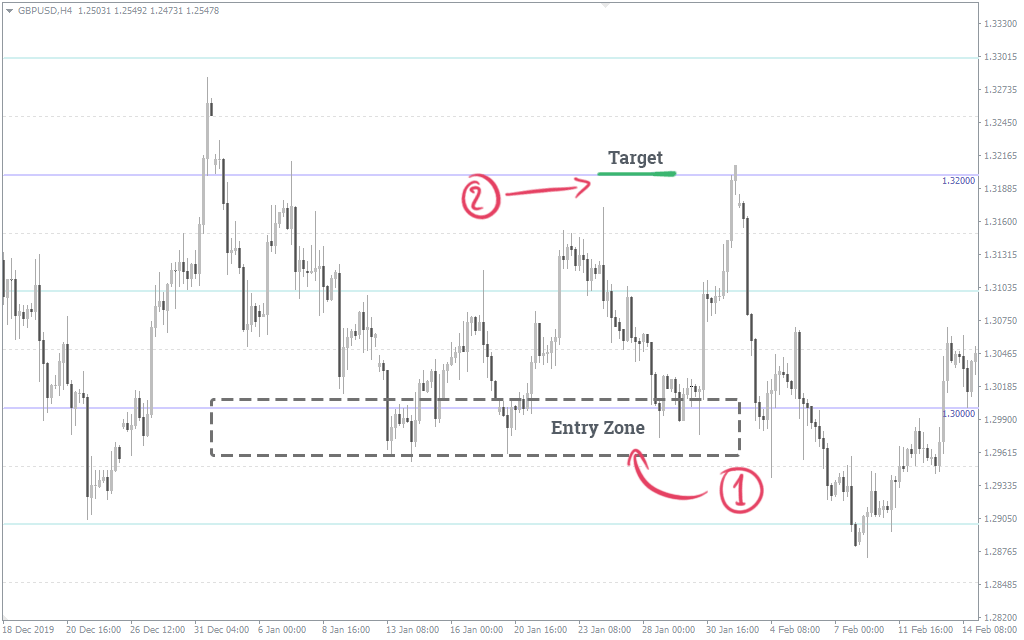 The target should be set before the trade is opened. This is necessary to set the right risk/reward ratio.

A round level can be used for an entry in case it has been defined as a support or resistance level. 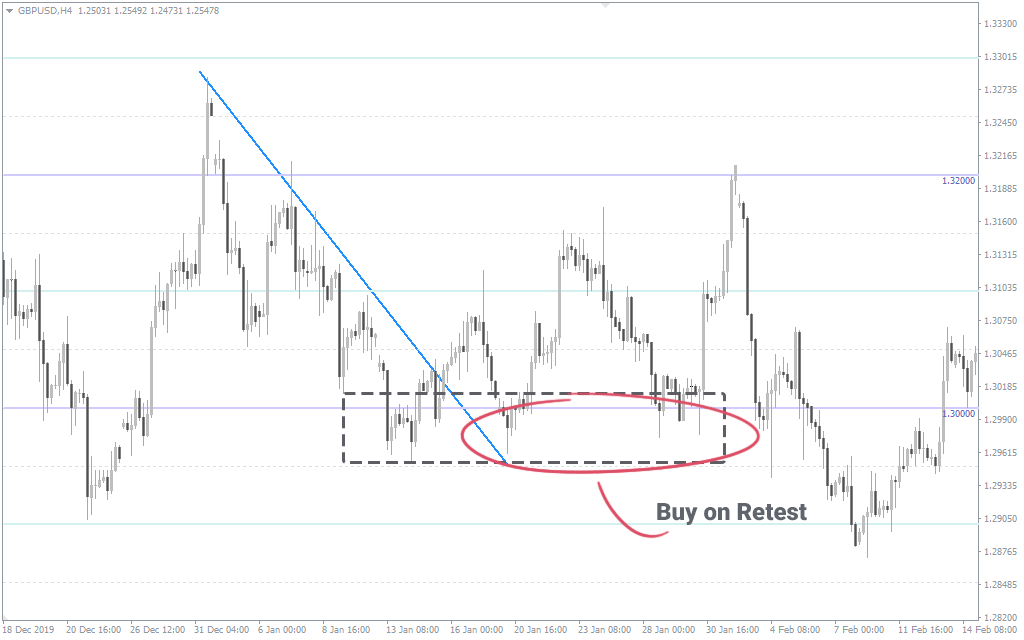 The breakout of the downtrend indicates a change in the interests of market participants from Sell to Buy. The round level, previously acting as a support, along with a change in trend can serve as an entry point.

Again, a trade will be more efficient if you use as many signals in combination as possible

Placing Stop orders with the Round Levels indicator

The previous examples show that market participants pay attention to round levels. You can tell by the characteristic price behavior next to them.

In the article describing how to set Stop Loss correctly, we suggest setting it outside a zone of Stop orders cluster of other market participants.

Given that a large number of Stop orders are often placed at the round levels, you should avoid setting your Stop Loss there.

A resistance level at 1.3800 from the example above allows suggesting that Short trades will resume when the price approaches the given level. At that, it will unlikely be broken out.

Therefore, the safe level for placing Stop Loss for a planned trade should be above resistance and round level.

The Universal Usage of Round Levels

The psychology of trading participants’ behavior, along with the fundamental and technical analysis, plays a very significant role in asset pricing.

That is why the importance of using the Round Levels indicator can hardly be overestimated. If you take round-number levels into account while planning your trading, it will initially increase your chances of making a successful trade.

Given the efficiency of applying round-number levels, they are used by all participants of the Forex market: from private traders to large investment funds and banks. Analysts rely on them in their market reviews as well.

Features of the Round Levels Indicator

FXSSI.RoundLevels is an easy-to-use indicator but very useful at the same time. It was developed specifically for the MT4 terminal and is available to download for free.

The key difference between this indicator and the similar ones is its scalability.

Automatic zoom. When using similar indicators, you have probably noticed that there is barely one or two levels on M1 timeframe. But on D1, you could see a few tens of them, which causes some discomfort. Depending on the selected asset or timeframe, the given indicator is adjusted in such a way that the number of levels on the chart remains approximately constant.

Various options for labeling levels. By default, the price of a level is specified near it. However, the price is not as important for many traders, like the fact that there is a level. Therefore, it’s more convenient for them to see the distance from the current price to this level. This option can be enabled in the settings. 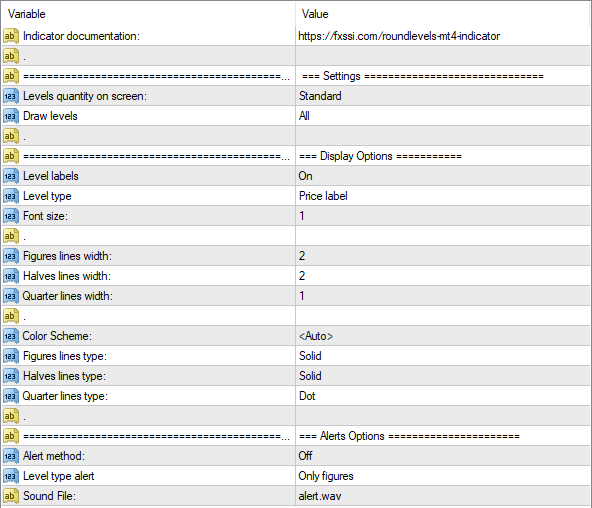 Levels quantity on screen – defines the number of levels displayed on the chart: standard; more; less.

Draw levels – allows you to choose which levels should be drawn on the chart: all levels; round-number and halve-number (halves) levels; only round-number levels.

Level labels – enables or disables the labeling of round levels.

Level type – marks level as a price; the distance to the level will be displayed in points from the current asset price.

Front size – select the size of labels for round levels.

Color sheme – by default, the indicator automatically detects the color scheme depending on the chart background. If necessary, select the desired color scheme from the list.

Alert method – notifies you when the price hits a round-number level.

Level type alert – notifies you when the price hits the following levels: only round-number levels; round-number and half-number (halves) levels; all levels.

How to add FXSSI.RoundLevels in MT4

Follow the instructions below to install the Indicator to your MT4 terminal:

If you have any difficulties while installing the indicator, please view the detailed instruction.